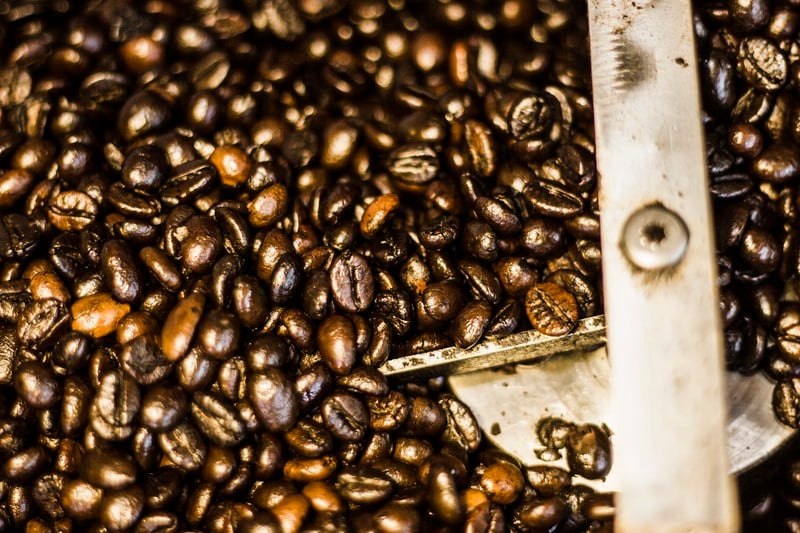 As Vietnam’s latest coffee baron in the making, the German entrepreneur is on a mission to address the glut of unhealthy chemical fakes on the local market, putting the genuine bean back into local phins. While a foreigner selling coffee to Vietnamese people may seem like an exercise in selling ice to eskimos, Dietmar just may have the right formula to make it work.

“Once you get Vietnamese people to try real coffee,” he says, “then it’s difficult for them to go back. You start to get an addiction, you start to understand how coffee reacts and acts, and what it does to you, to your body. Once you understand this step, then you cannot drink fake coffee anymore.” 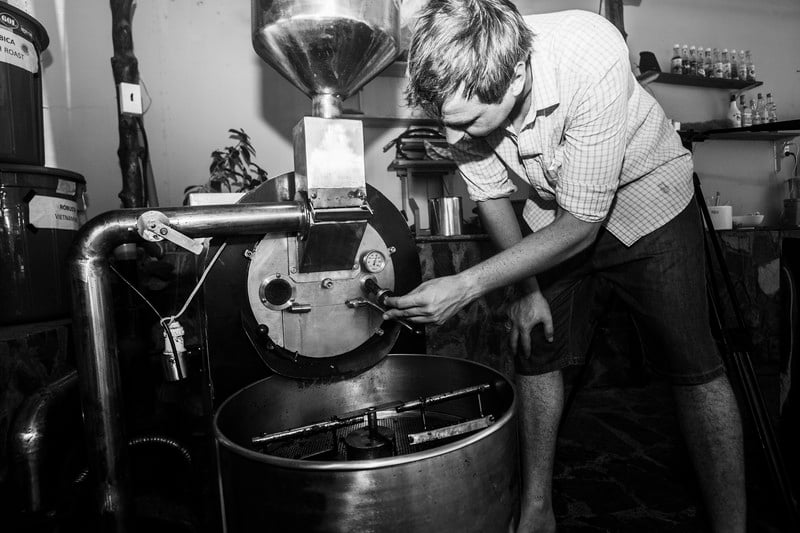 Living in Vietnam since 2009, Dietmar’s interest in coffee finally saw him taking the plunge and joining the country’s hundreds of small roasting businesses at the end of last year, his point of difference being a determination to provide the same quality of coffee you’d expect in Europe at prices amenable to the local market. To his surprise, his efforts have won him overwhelming support from within the local startup community, and he has already been highly ranked at their events, at which he is routinely the only European face.

His coffee business has taken a long time in the planning, however. “I started out by stopping at farms in the middle of nowhere and talking with the farmers directly in my broken Vietnamese,” he says. “Then I worked on creating my own brand. I already had a name, Farmers Blend Coffee. I started making small packages. I didn’t roast it myself. I bought it roasted already.”

Without any prior experience in the industry, Dietmar started with only basic coffee knowledge. After experimenting with the roasting process using a popcorn machine at home, he eventually purchased a professional roaster and underwent three weeks’ training with a fellow German expat who had previously worked for Starbucks. Having gained some level of confidence, he then focused on developing two blends – one flavored with butter, rum, and salt to suit Vietnamese tastes, and another entirely unflavored to create a local alternative to expensive imported Western coffees. 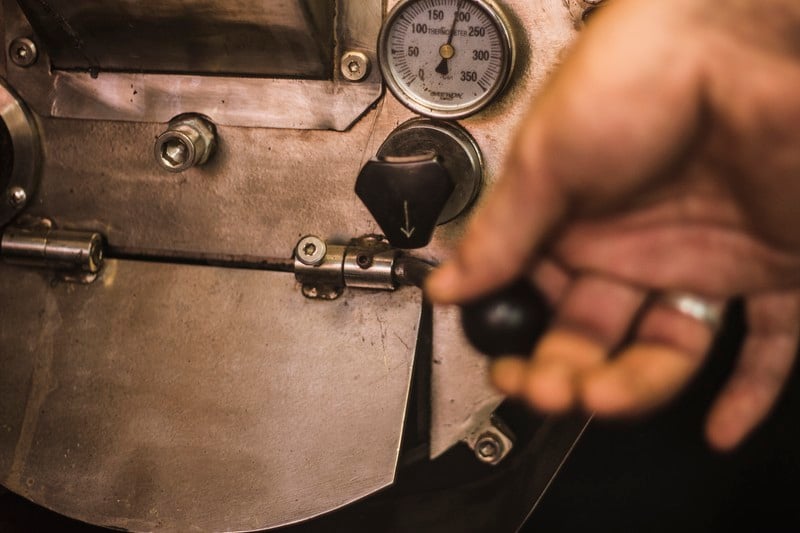 Dietmar puts the differences between local and international tastes down to simple economics. “In Germany after the war, we had something very similar to Vietnamese coffee now,” he says. “Just because of the price. We had coffee, and they put chicory in it. It had the flavor of coffee, it tasted like coffee, but it wasn’t. It’s just a matter of choice. So we had the same thing at home like they had here. We changed, so will Vietnam.”

It’s taken a good deal of trial and error, however, to match the demands of local taste buds. “I mainly gave it away at first, just to see what Vietnamese people would like,” he says, “mostly to get their feedback. Most of them would say, ‘oh, no good, no good, no good!’ I asked why? It’s coffee, you know? ‘Yeah, it’s not black enough. It’s sour. It’s not coffee.’ I was even accused by a lady at the market of trying to sell her fake coffee. It didn’t taste like hazelnut, it wasn’t syrup, like they’re used to. But I said, ‘you know what? It doesn’t matter. I will stick with what I want to do.’ I don’t even know how to make fake coffee.”

“The Vietnamese, they like it black,” he says. “They like it when it smells. That’s why I put the butter in. Butter has very little effect on the taste, it just makes it shiny, it makes it seem stronger, so it looks traditional. The rum is the same thing. It’s like a marinade. That blend is better if you put it in the phin with sweet milk. They use about 20-25 grams for one serving, whereas with an espresso, you use only seven. But when you drink it with ice, that’s when it really waters down, that’s why they drink it with ice. Otherwise it’s way too strong. But if you have a street coffee that’s so black you can’t even see through it, that’s food coloring. The consistency is syrupy, which comes from some sort of starch – be it soya bean, corn starch, or something creamy. That can never be real coffee.” 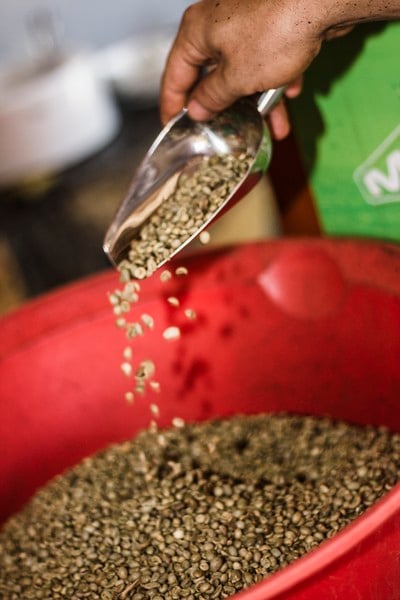 “I have a very big advantage being a foreigner,” Dietmar says of his presumption to try to take on the Vietnamese at their own game. “It always sounds bad, and I don’t like to use this card – it’s just what it is. But I believe I have a better chance to teach the Vietnamese than a local would. You have Vietnam Idol, you have Vietnam’s Next Top Model, you have all these Western shows. People are in the market for all things Western. There are so many articles in the newspapers about fake coffee, and Chinese chicken, whatever – and they read these things. They would like to change, but it’s inaccessible to them. You have to give them access to the real world. If you make it accessible, they use it. They say there’s no market for unflavored coffee here, and it’s true – until somebody starts it.”

While the locals may be in for a long- overdue caffeine hit with Dietmar’s local blend, it’s his Italian-style blend that has been gaining him traction in the expat market – among foreigners who are relieved to no longer have to shell out VND300,000 for a 200 gram bag of over- the-counter grinds at Starbucks. They’ll be in for a surprise if they’re expecting a 100% arabica blend, however – there are several important reasons why Dietmar’s an unexpected champion of the much-maligned robusta bean, which by far constitutes the vast majority of local harvests.

“We Westerners are pretty focused on arabica beans,” says Dietmar. “Everybody says robusta is not good, but this is not true. My Vietnamese blend is only robusta. Robusta isn’t bad coffee, it’s just that our tastes are different. Robusta is stronger – for example, if you drink filter coffee at home, out of a percolator, there’s robusta in it also. If you drink an espresso, even if it’s from Illy, there’s robusta in it too. It’s because robusta makes the body and the crema. It just comes naturally, because one thing doesn’t work with the other. I get a lot of people telling me, ‘you need to do 100% arabica’. I say it doesn’t work. First, the quality of arabica in Vietnam is not good. Second, it’s a very mild coffee. It’s very balanced, but robusta is the thing that gives you the kick, the body. So that’s why you blend it together.” 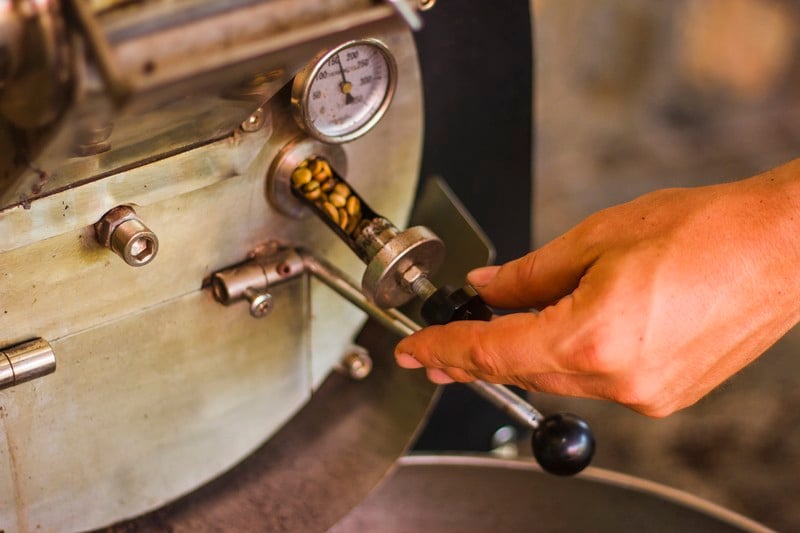 “It’s a matter of price and a matter of taste,” he explains. “Arabica is double the price of robusta, for example. But one thing doesn’t work with the other one. It’s like a bordeaux. Three different grapes. That’s what it is, it’s a blend. Unless it’s a specialty single-origin coffee, 90% of all the coffee you buy are blends either one way or another. Arabica dark roast with 10% robusta medium roast, something like that.”

“I’m not into specialty coffees,” he admits. “I understand why people do it, but for me, like 99% of the rest of the world, a coffee either tastes good or it tastes not good. I’m not a hipster. A bit of lemon so it’s zesty… they like it, and why not too? But I’m not that kind of person. I understand coffee, but I don’t understand it that much. I’m an everyday cup of coffee – that’s what I want to be. I always buy the same things from the same people, so it’s very consistent. It always tastes the same. That’s the most important thing.”