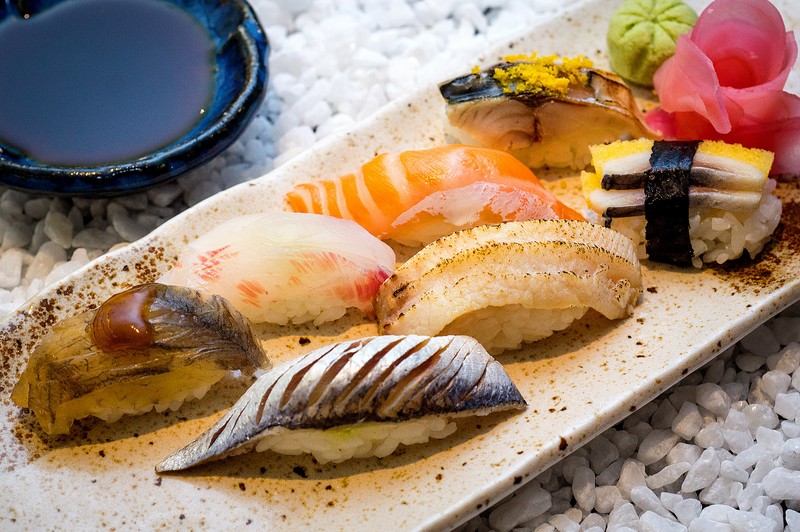 Most everyone knows what sushi is and that it comes from Japan. What many probably don’t know is that the original sushi, called nare-zushi, originated in Southeast Asia somewhere along the banks of the Mekong. Nare-zushi is still prepared today in Japan, but bears little resemblance to what is recognized internationally as sushi. A man named Hanaya Yohei is credited with creating the contemporary version of sushi sometime around the mid-19th century. As with many cuisines, they are adapted to suit particular tastes. Sushi is no exception as it was adapted to Western preferences in California and it has continued to evolve since.

It wasn’t long ago that Saigonistas seeking to indulge a sushi craving had only one or two venues from which to choose. Now options other than the usual suspects and conventional haunts include ritzy rooftop settings complete with elegant cocktail bars, louder atmospheres that boast music and go go dancers, and street sushi served al fresco on some of Saigon’s sidewalks that once catered strictly to snail lovers. 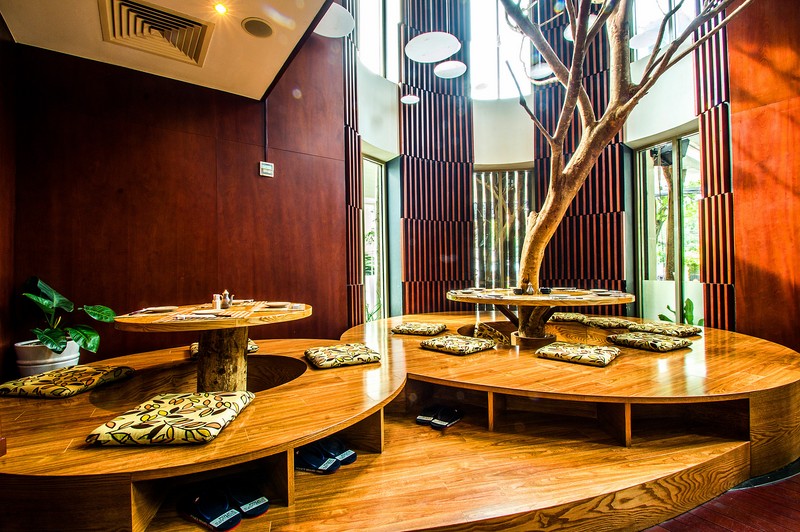 Then there is Sushi Dining AOI (pronounced ah – oi; GF Saigon Pavilion, 53 – 55 Ba Huyen Thanh Quan, D3), named for a species of flower native to Japan. Electing to leave opulence and gimmicks to others, AOI exhibits an understated sensibility that offers a minimalist, yet very functional setting. Temporary screens separate tables in the main dining room while larger groups may congregate at circular tables built around trees, giving patrons an atmosphere that feels distinctly Japanese. Not content with supplying merely the proper surroundings, their chefs all trained in Japan for several years before returning to Vietnam to apprentice alongside Japanese chefs for a further two years before taking the reins. 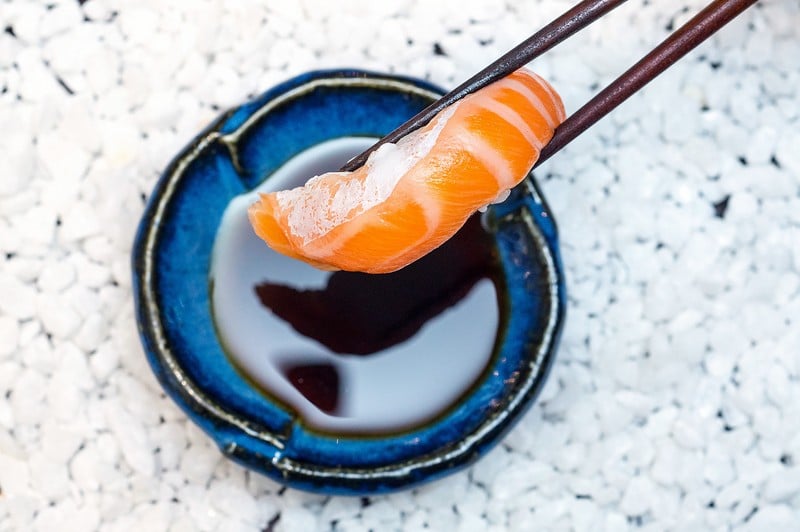 While the environs may be understated, the sushi most certainly is not. With my dinner companion having canceled on me, I asked Tu, the assistant manager, to order for me. I was treated to several rounds of delightful creations from both their cold and hot kitchens (the sushi bar was under repair that evening). The meal began with a selection of sashimi, which included special imported Japanese tuna (VND349,000), fatty tuna (VND479,000), yellowtail (VND310,000), and scallops (VND189,000). Each one was wonderful and worth going back for, but the Japanese tuna was most remarkable in taste as well as tenderness. I can’t recall ever having any tuna sashimi so sublime. The scallops also proved to be so delicate they weren’t very long on the tongue. I wished there had been a few more to savor! I enjoyed the yellowtail immensely, if for no other reason than its rarity around town. Fatty tuna has never been one to light up my palate, but devotee of toro tuna will be delighted with AOI’s imported variety. 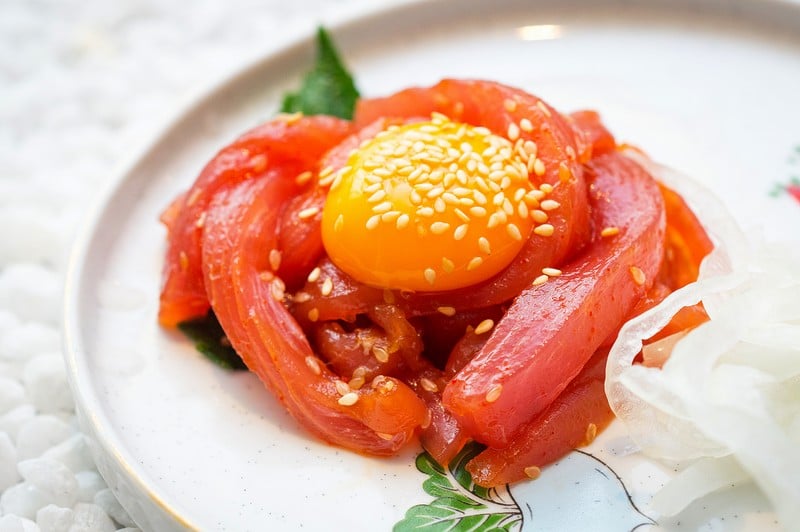 Accompanying the sashimi was an order of maguro yukke (VND98,000), which is raw tuna in spicy sauce. Presented in a shaped mound and topped with a perfectly formed raw egg, the eyes are the first to feast. While the sight of a bright yellow egg yolk in all its uncooked glory may give pause to many, a moment of courage is all that’s required to take the plunge and bask in what is one of AOI’s most popular menu items, especially amongst their large Japanese clientele. 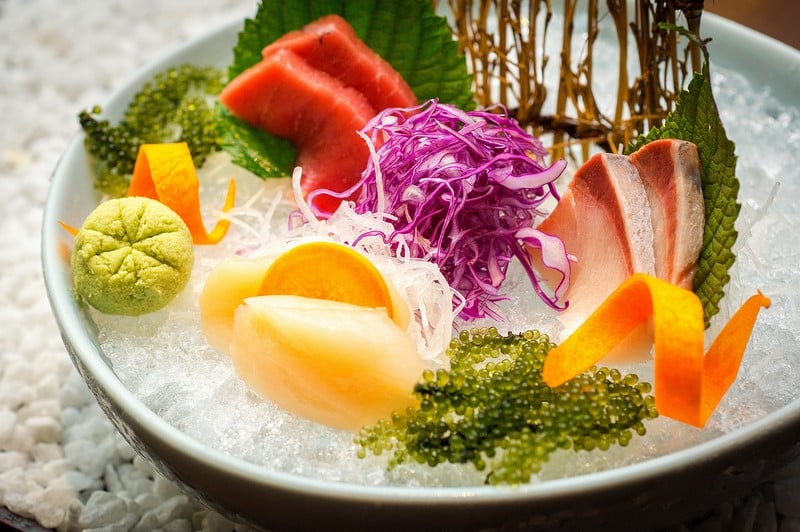 The lineup of raw nigiri sushi included surf clam (VND112,000), flying fish roe (VND52,000), shrimp (VND48,000), ark shell (VND72,000), soused mackerel (VND48,000), and kobujime (VND60,000). If there is ever a cut of sushi that could be termed al dente, it’s the ark shell. It has a firmer texture than most and is worth sampling. The soused mackerel was oily and strong and another that will reward those who can tear themselves away from the tuna and salmon habit. The kobujime is lined with kelp and a special ume sauce. The finished product is a bit chewy and a stronger taste, but discovery is part of the sushi experience and this certainly enhanced my visit. 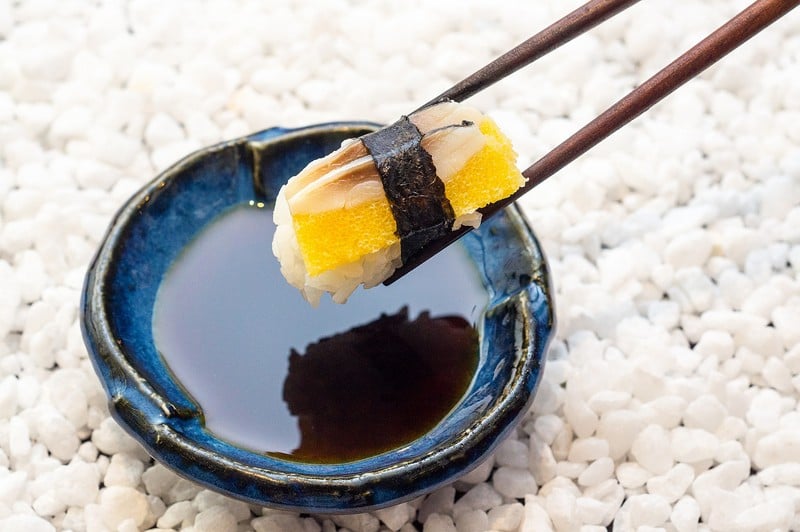 Asking a sushi chef to serve you what he enjoys making is always a wise strategy. Chef Hieu prepared a selection of his favorites, admonishing me not to dip them in soy sauce or wasabi. They included some cooked versions of salmon belly (VND76,000), kohada (VND38,000), yellowtail belly (VND149,000), and grouper (VND46,000). I admit a bias against the cooked sushi and prefer to order raw, but each was delicious and an eye-opener. 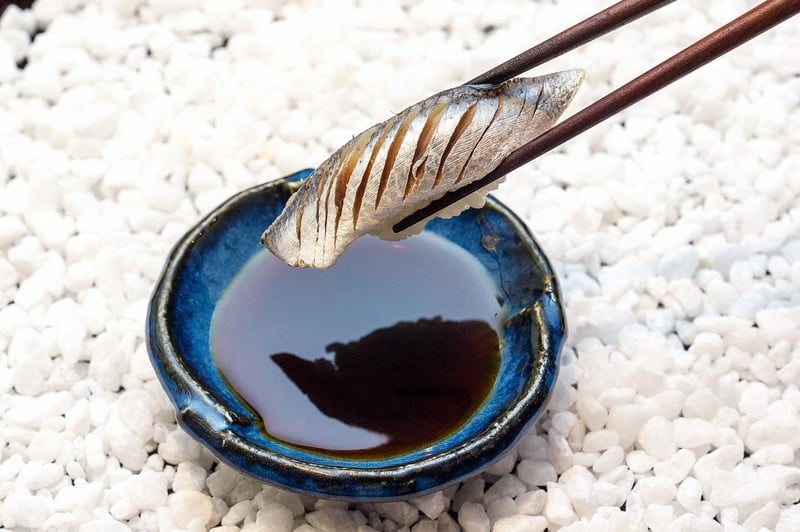 AOI is the only sushi bar in Saigon where one can order kohada, making it nigh obligatory. If you’ve never sampled it, you’ll enjoy discovering it, and if you have, you don’t need any convincing. The yellowtail belly and salmon belly were revelatory for me. They’re certainly worth reconsidering one’s stance on raw versus cooked sushi. The grouper, also delectable, was excellent.

Items from the hot kitchen were the last to arrive at the table. Deep-fried oysters (VND124,000) that would make any New Orleans po’ boy aficionado nod in approval were served with a sweet dipping sauce. A delicious surprise, they may be habit forming. And last was the tempura. A selection of vegetables and seafood lightly battered and served with a delicate sauce capped the evening and stretched the limits of my waistband. 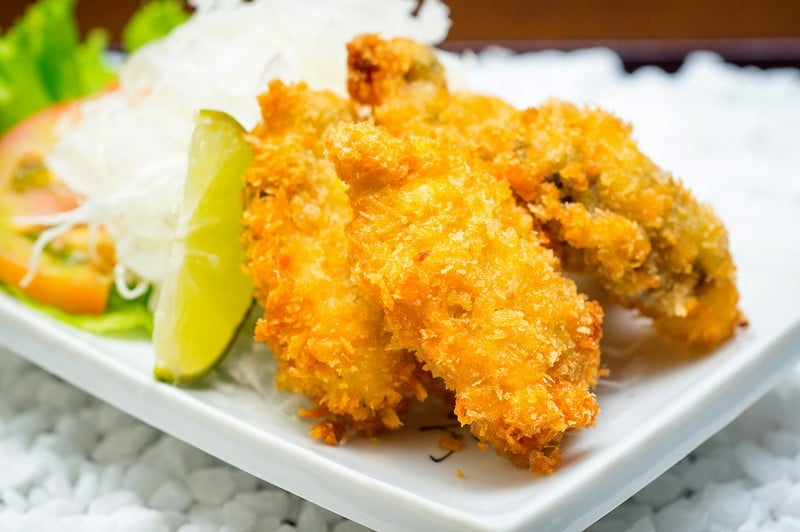 AOI’s breadth of menu does not hamper their ability to deliver quality, service, or taste, making return trips as necessary as they are anticipated. One of the more attractive features of sushi may be that even if your friend cancels, your date stands you up, or you just feel the need for some alone time, there’s a seat waiting at their sushi bar where you can sidle up and ask Hieu what he wants to serve you.

HOW TO EAT SUSHI PROPERLY

– Nigiri sushi is best eaten with the fingers. Dip it into the soy sauce fish side down.

– Rolls and sashimi should be eaten with chopsticks.

– When served rolls, sashimi and nigiri sushi, eat the nigiri first as it tends to dry out, followed by rolls, then sashimi. 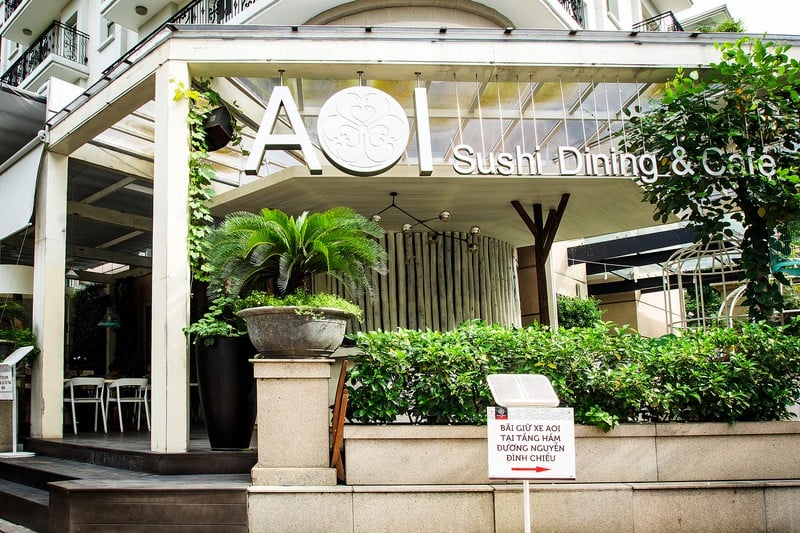