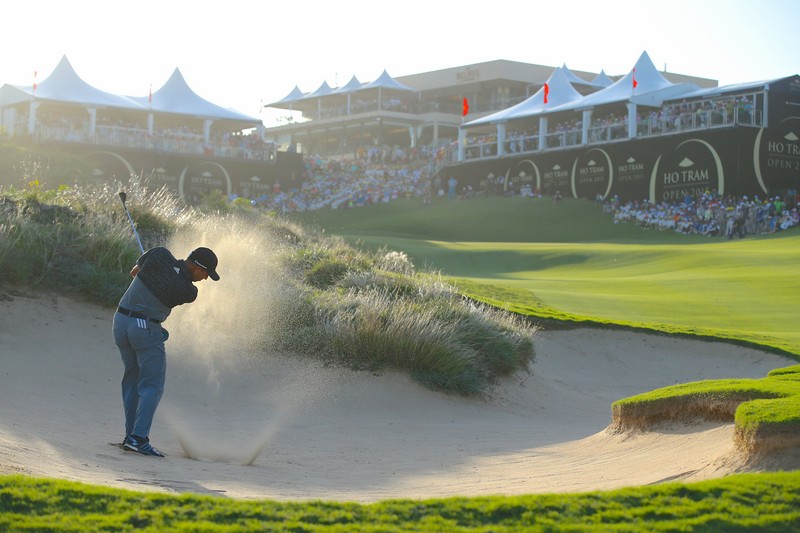 Ho Tram Open Ushers in a New Era for Vietnam

The Ho Tram Open has come and gone, and now the dust has settled all we can say is… roll on next year!

As a proud media partner of the event, Oi Vietnam got an up close experience and had the chance to speak to spectators and sponsors throughout the week, who were unanimous in their collective praise for the show the event organizers put on.

So if you didn’t get the chance to make it down to the Ho Tram Strip, what did you miss?

First and foremost, one of the most exciting climaxes in the history of the Asian Tour! The first four-man playoff in the Tour’s history pitted the wits of world superstar Sergio Garcia, who appeared to have thrown away an unassailable lead, Thaworn Wiratchant, one of the Asian Tour Godfathers, Himmat Rai a young star from India and Lin Wen-Tan from Taipei, who had entertained crowds all week with his colorful on and off-course display.

On two occasions it looked like the young Indian golfer Rai had the Championship in his grasp.

Firstly in regulation play, as Garcia made an uncharacteristic double-bogey on the 17th in plain view of the coliseum- like hospitality on the banks of the 18th green, that gave distant views of Garcia’s tribulations. 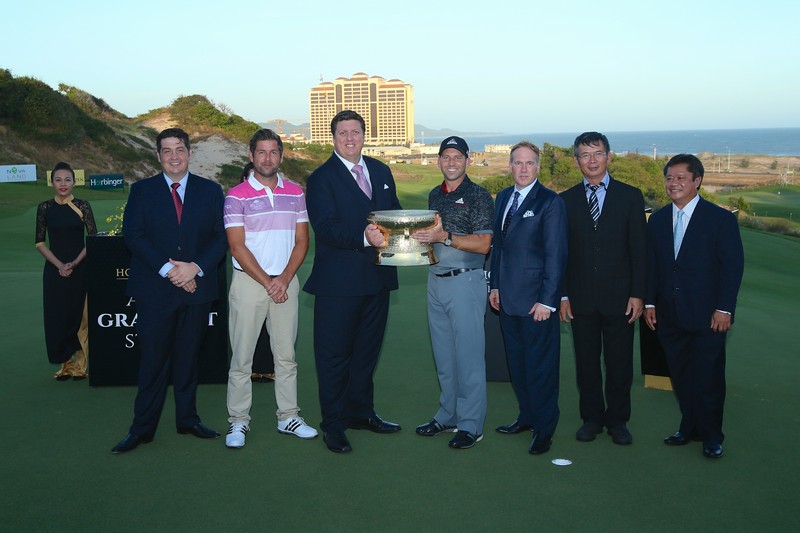 Rai was safely on the 18th green in two, but faced a challenging two-putt to surely claim the second title in his Asian Tour career. His first putt came up short and was unable to hole-out for what would have been the biggest win, and biggest pay-day of his career.

A par at the last for Garcia triggered a four-way playoff.

Rai’s second chance came at the first sudden-death playoff hole, hitting his approach shot to within 8 feet under the sternest of pressure. Wiratchant stuffed his second into no more than 12 feet. Wen-Tan hit a miraculous recovery from the steep sand dunes and Garcia, after a colossal drive left only a gap-wedge 30 feet short, leaving an almost impossible putt and surely rendering his championship hopes redundant. 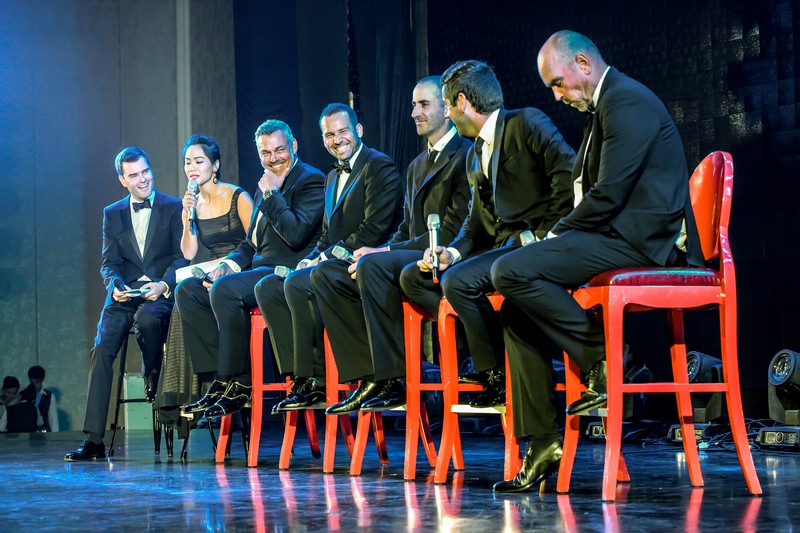 As the four gladiators approached what had been aptly termed “Asia’s Grandest Stage,” the crowd were stunned at the prospect of the mighty Garcia being held off by a once-in-a-lifetime performance by Rai. But there were still 2 others with a chance. Wen-Tan putted first, to within a few feet – tapping in for his par-4. Garcia next, surely resigned to a tricky two-putt par-4 and a title let out of his grasp?

What happened next is reserved exclusively for true Champions. Garcia’s putt tracked the first 18 feet up hill, then swiftly turned down hill and down grain banking hard left as gravity around the steep sided 18th green took hold. The resulting cheer was tantamount to a Major Championship or even a Cup final goal, the crowd clearly ecstatic and amazed at what they had just witnessed. Garcia had heaped the pressure on Wiratchant and Rai, both still with a chance to extend the play-off. 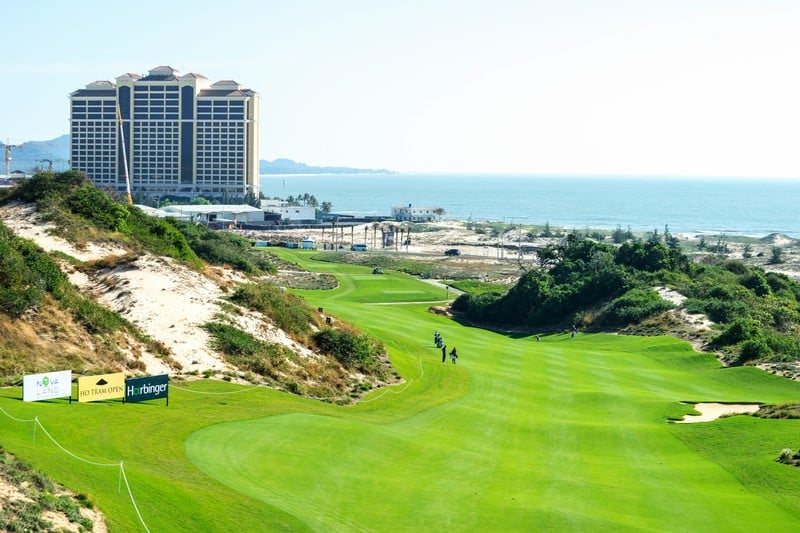 Wiratchant’s effort slipped by the right edge of the hole, so was left to Rai. Under the most extreme pressure, the charismatic Rai kept control of his nerves and holed out to extend his dual with Garcia.

The crowd were left breathless as both golfers were ferried back to the 18th tee. It was a pressure cooker environment. Garcia tee’d off first, ripping a 340 yard drive that found the precariously placed fairway bunker – courtesy of golf course designer and golf legend Greg Norman.

Clearly exhausted, Garcia was drowned in Champagne by some of his countrymen and closest friends, showing the popularity of one of Spain’s favorite sons. After the round Garcia was clearly delighted to have won given the quality of his golf through the week. 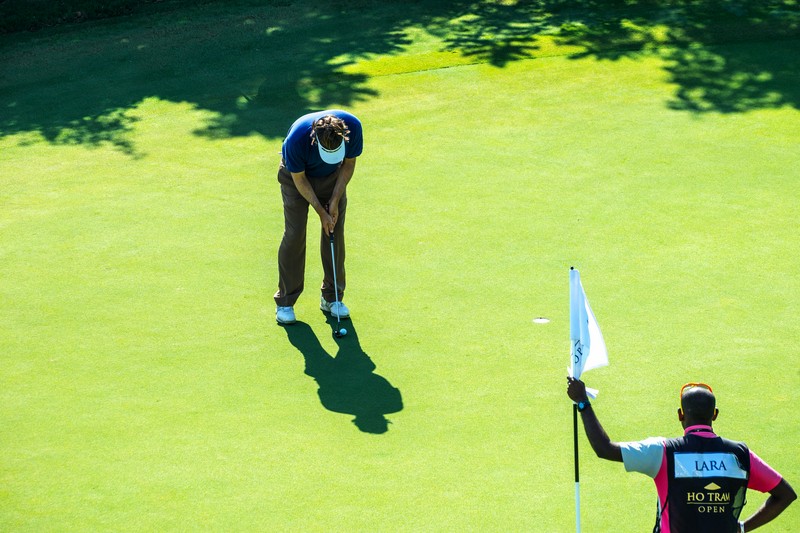 “Winning is never easy. I was fortunate and you have to be lucky to win. I was fortunate to get a second chance after I pretty much gave it away. I’m very happy as I haven’t won in a while. After you’ve been up there and you don’t win, a lot of things go through your mind and this win will help give me a little bit more confidence,” said Garcia, who signed off with a three-under-par 68 for a 14-under- par 270 aggregate.

The Ho Tram Open created something different, the likes of which has not been seen in the region. Not only did the event secure the attendance of world stars such as Sergio Garcia, Darren Clarke, Thomas Bjorn, Geoff Ogilvy and Robert Rock, it created something the world of golf will surely not forget in a while and certainly not the sponsors, guests and players. Being Vietnam’s biggest-ever sports event and the richest of its kind, there was much anticipation. The ambition was lofty and on the face of it would have required a superhuman effort to pull-off. 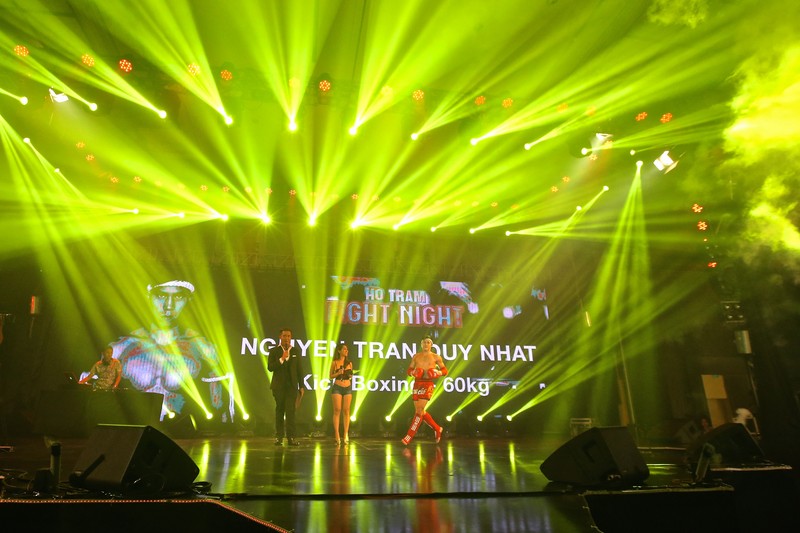 The strap line Where Golf Meets Entertainment, which was splashed around Vietnam’s major towns, cities and airports, lived up to the billing.

The week-long entertainment program would have put any major event to shame.

The Ho Tram Strip has evolved into one of Southeast Asia’s preeminent entertainment and luxury hotspots, and if the Ho Tram Open is anything to go by, the destination is on an unmatched trajectory. So what were some of the must-sees from the week’s entertainment? 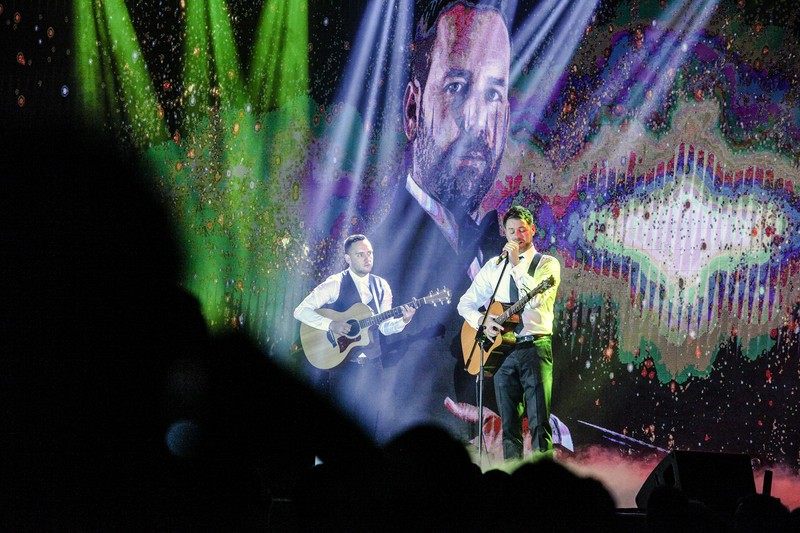 The black-tie affair was regarded as a must attend event for the great and the good from the world of sport, business and celebrity.

Reserved for sponsors, players, VIP guests and officials, the evening kicked off with former Westlife star Brian McFadden performing in front of a backdrop akin to a Bond film opener. Brian was joined by Vietnam’s very own stars, Duc Tuan and Tia Hai Chau, who performed a closing duet with McFadden to close the show.

Guests also enjoyed an interview with the headline players from the Golf Channel’s Tom Abbott, who shared some of their favorite moments in golf and their excitement at being at the Ho Tram Open. 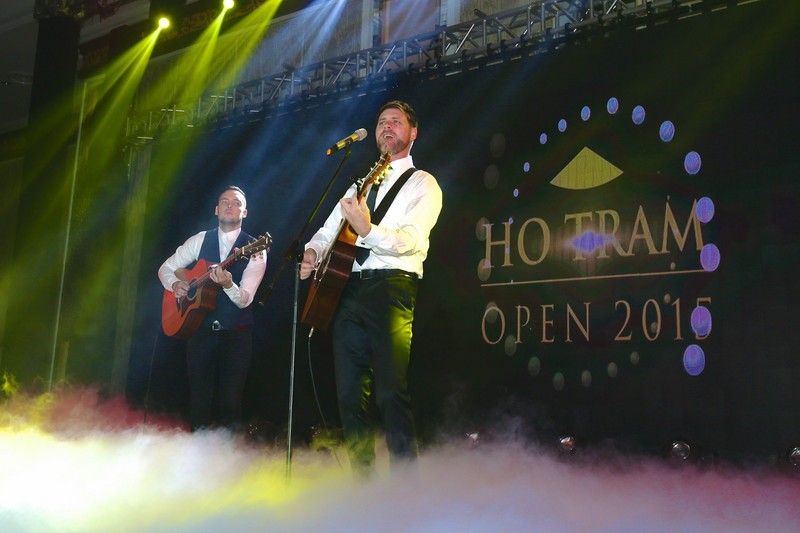 The executive team from the Ho Tram Strip also celebrated a recent haul of awards that included the prestigious “Best New Golf Course in the World” from the World Golf Awards.

Post Gala, guests had a wealth of options, from the casino, in-house boutique nightclub, poolside parties and a selection of bars from which to choose.

A good start to the week! 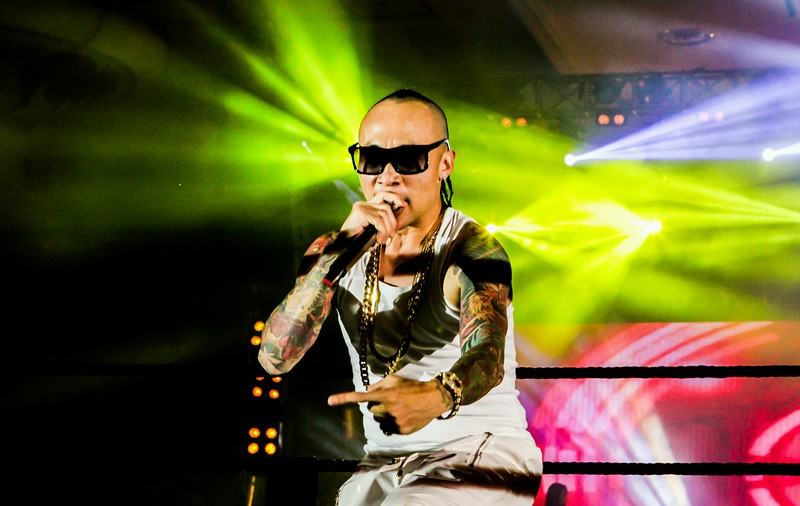 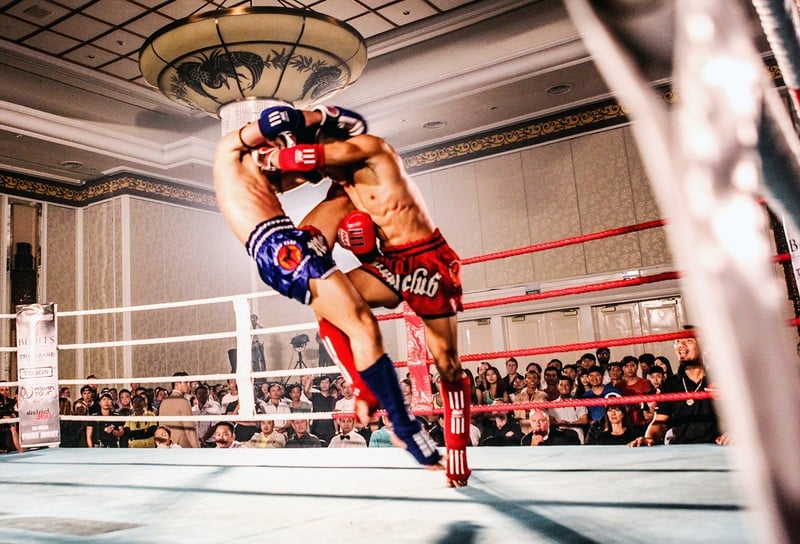 Hot on the heels of the gala, a pro-am place is one of the hottest tickets in town. Traditionally, the money-can’t-buy experience of golf, sponsors and VIPs were treated to the five-star service from The Bluffs team, having the chance to play the pristine course just a few hours before the Championship kicked off in earnest.

To match any fight night in Vegas, the Friday evening was a showdown at The Grand for some of the regions’ top Muai Thai fighters and boxers. Staged in The Grand Ballroom, the evening was a sell-out, with anyone who registered for a ticket enjoying the spectacle free-of-charge.

Brian McFadden was a hit through the week, enjoying the atmosphere and excitement only a destination like Ho Tram can offer up. The amiable Irishman was a huge attraction. Tickets had been offered up to spectators and guests free-of-charge, encouraging a surge from Ho Chi Minh and Vung Tau, making great use of the free bus service provided by the tournament.

The Grand is the perfect concert venue. It has space to accommodate bespoke bars and food stations. It has the right feeling of grandeur to stage these major entertainment outings. It importantly has the amenities to accommodate the after parties for something of this scale.

As you can imagine, the party ran long into the night and was a memorable occasion for all who attended!

So in conclusion, this event has certainly captured the imagination of a broad spectrum of people in Vietnam. To stage such an ambitious event in its first year and to deliver it without a hitch is something to celebrate and something which has set a new precedent.

From what Oi understands there are plans to go bigger and better in 2016. With the return of defending Champion Sergio Garcia and a promise of the world’s best golfers, The Ho Tram Open has taken a giant leap in becoming one of Southeast Asia’s must attend events, but also one of world golf’s new stars.

Huge congratulations from Oi and more of the same!