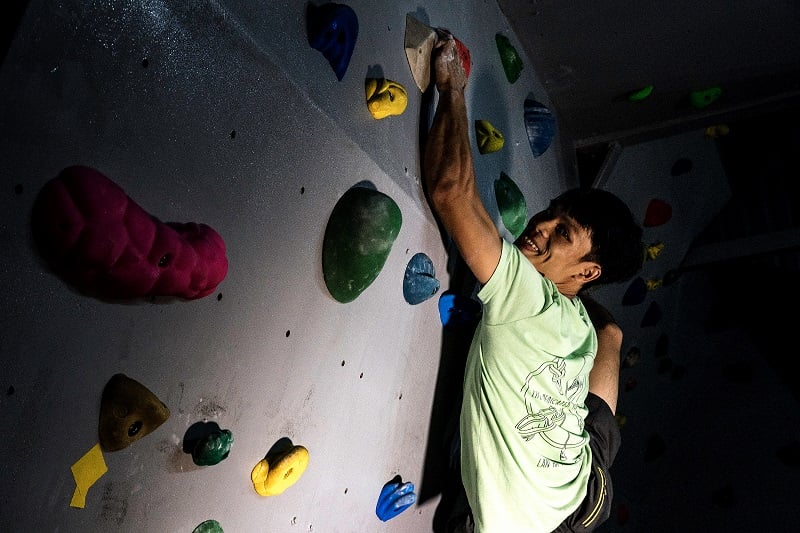 For Vietnam’s best rock climber, no shoes are no problem

When I arrive at push climbing, the rock climbing gym located within Saigon Outcast in Thao Dien, Vu Nguyen is nimbly shimmying his way up a pole, utility knife in hand, and securing a safety pad as a group of the city’s most experienced climbers, young and old, put the finishing touches on the gym’s new bouldering facility. Seeing the bewildered look on my face, he cracks a smile before returning to the ground.

A man of humility with a wide grin perpetually on his face, you would never know it talking to Vu, but the 26-year-old is broadly considered the best Vietnamese rock climber. He cannot hide his talent, however, as he tests out the routes he has been working to setup on the wall, body contorting and comfortably hanging by the tips of his fingers as he methodically raises a leg above his shoulders, somehow finding a way to lock his heel into place and take a moment of rest. To watch it is to see poetry in motion, and yet this is not Vu at his best. 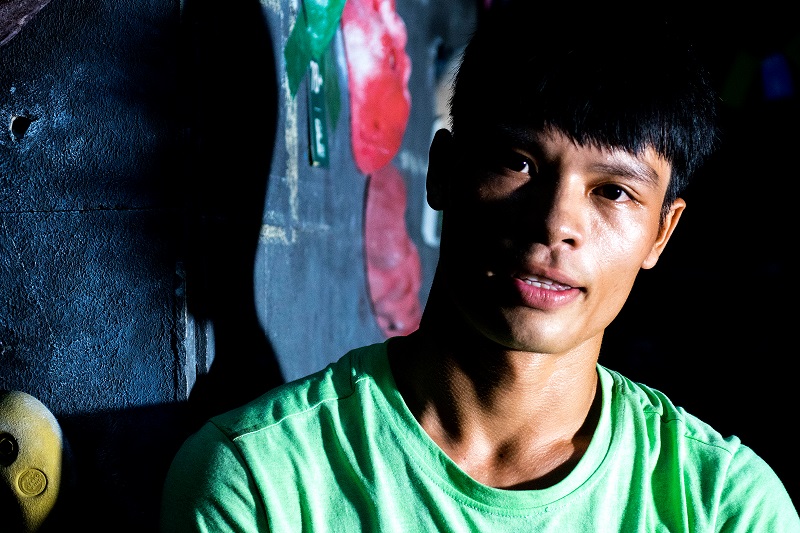 Where he truly sets himself apart from the crowd is on a real outdoor rock wall, where he prefers to scale cliffs without an essential piece of equipment: shoes. “Outdoors, I always climb barefoot, but at climbing gyms, the managers don’t like it,” he says, explaining the presence of his footwear this evening.

In the climbing world, it’s not really up for debate, but rather accepted as a fact that barefoot climbing is a disadvantage. Shoes increase grip and provide protection when standing on sharp, jagged rocks, balancing all of your weight on your toes or jamming your feet into tiny crevices. This is what makes Vu an anomaly.

Asked about how his feet fare on the unforgiving limestone karsts of Cat Ba Island, Vietnam’s most established rock climbing destination where he was first introduced to the sport seven years ago and worked as a guide for Asia Outdoors, his face instantly lights up and he proclaims “I love limestone!” before nonchalantly adding, “I get small cuts on my feet sometimes.” 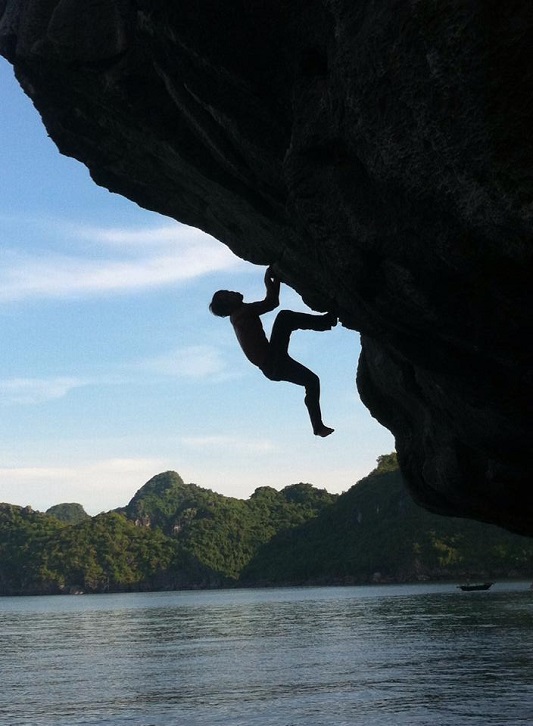 Sharing that the most challenging route he has completed barefoot is graded 8a—a reference to the French rating system that measures difficulty, and a level that, according to the International Rock Climbing Research Association, is classified as elite—it prompts the question: is there anyone else in the world who can do that without shoes?

“I don’t know. There’s one guy from Germany. I used to watch his videos, but I forget his name,” he says, referring to Bernd Arnold, the now 70-year-old mountaineer who is credited as the pioneer of barefoot climbing. Essentially, what Vu is reluctant to admit, though I’m hearing nonetheless, is that right now, no, there is probably no one else in the world who can do what he does.

Taking the challenge to another level—and the challenge is what he finds to be the biggest draw to the sport—is that on Cat Ba Island, and other places that will allow it, he frequently climbs above water without a harness, engaging in what is known as deep-water soloing. With little room for error, he casually describes climbing a 17-meter rock face and, once atop, plunging into the water below. Another time, he recalls, while deep-water soloing, he was given the shock of reaching for a ledge above his head only to find that his hand was on a large, venomous snake. “You’re not supposed to touch that kind of snake!” he says laughing, but luckily for him, the serpent was just as surprised and slithered away as Vu clung to the rock and managed to maintain his grip. 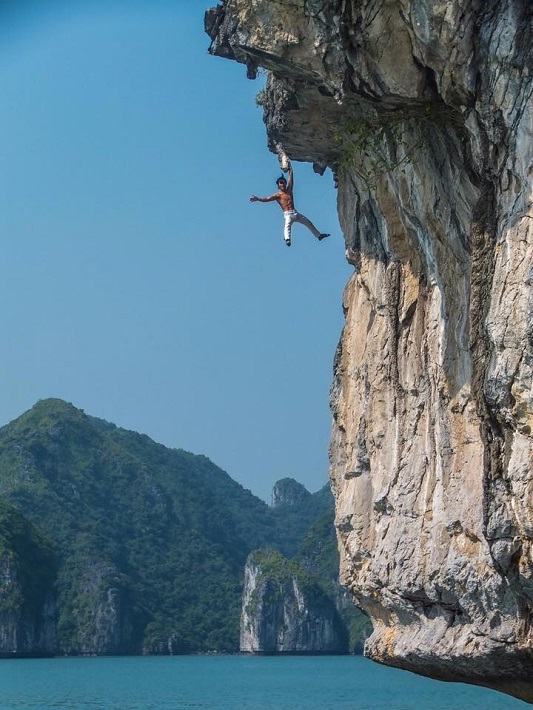 In Vietnam, rock climbing is still in a fledgling state, though there are indoor bouldering competitions in Hanoi, where climbers scale short but intensive walls without a harness. Requiring shoes, however, they aren’t exactly what Vu finds himself attracted to. “I like outdoor competitions, but they don’t have them in Vietnam,” he explains.

Nevertheless, he’s done his part to advance the sport in his home country, helping to setup bolts on outdoor rock faces, most recently in Mai Chau, which allows climbers to safely ascend by clipping the rope attached to his or her harness into the bolted wall. The sport, too, has given him opportunity to travel abroad, climbing in such places as Thailand, Singapore, Laos and Cambodia.

When asked where his favorite place to climb is, Vu takes only a quick moment to think before conceding, “I don’t have a favorite.” The world’s best barefoot rock climber simply and indiscriminately loves to climb, anywhere and everywhere he can.

2 thoughts on “The Barefoot Rock Climber”