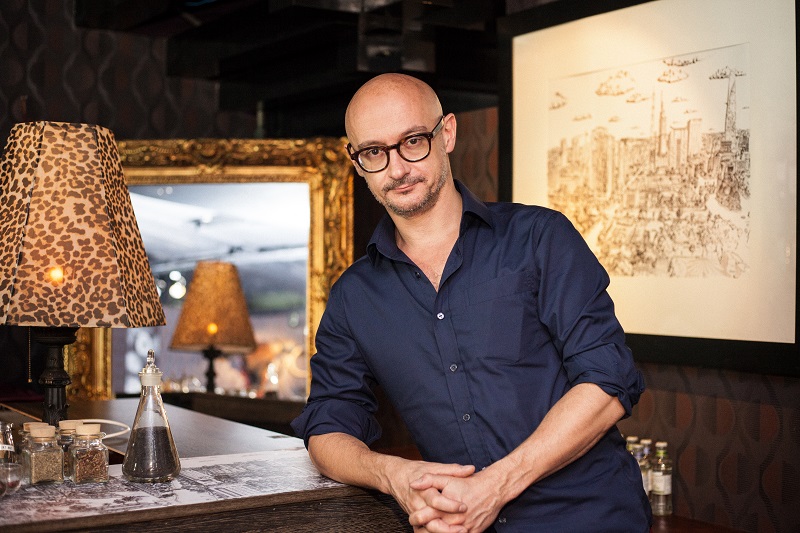 When he’s not crafting beautiful cocktails, Richie Fawcett is making art about his Saigon neighborhood

Saigon is changing and will almost certainly be different next year. Hell, the city might change next week. Like a living organism, it is constantly destroying and regenerating itself. Habits don’t do well in the city that can barely sit still. Yet, somehow Richie Fawcett can.

For years Fawcett has been a regular fixture around his part of District 1, observing and documenting the city in pen sketches. His Saigon drawings— too serious to be called cartooney, but too loose to be mistaken as a piece of realism—have immediately recognizable landmarks that place them somewhere definite within the city, maybe somewhere you have been before but didn’t stop to look at for long and maybe couldn’t have captured like this.

Fawcett’s drawings are like a meditation on the effortlessness of the city’s beauty, how the city’s actors—the food seller, the crossing pedestrian, the motorbike—are blocked like characters in a performance amidst a most storied set. They perform unconsciously, carelessly for usually for no one unless Fawcett is minding movements by which to match his pen strokes.

Like Saigon has many identities, many acts it can perform, the native Englishman wears a few hats. His plein air drawings visible both in his personal studio or at Shri, the upscale, rooftop restaurant he manages. A lifelong fixture at bars and restaurants ever starting when he attended university in London an archaeology student, which required a visit for a nearly 3,000-year-old sunken wreck off the coast of Cyprus. Shri is his magnum opus as a service manager and drink principal. The son of a chef, it’s a trade he’s been around since he was young.

But Fawcett is also a lifelong creative, having been taken with drawing ever since he was young. The craft is also a family heirloom; one piece in Fawcett’s personal art collection is a drawing by his grandfather. “I believe my artistic ability is a powerful combination from both my father’s technical ability and my grandfather’s classically trained artistry and draftsmanship. I never went to art school, ” Fawcett wrote in an email. Like treasure, he keeps it behind a heavy vault door Fawcett perhaps borrowed from a bank to put in to his personal exhibition space The Studio Sai Gon. 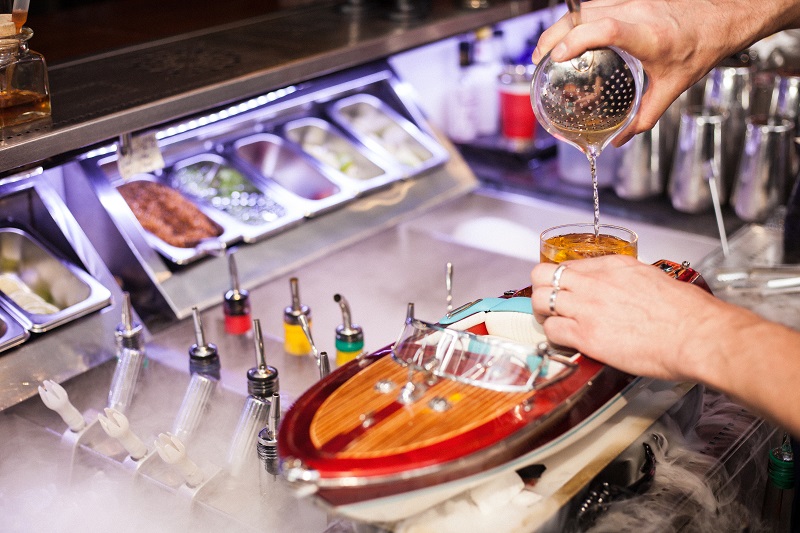 You’d have trouble locating said door within his studio without help. On an ordinary Saturday afternoon, Fawcett guided a visitor through his private studio. The small room is mostly monochrome black and white like Fawcett’s drawings. It’s decorated wall to wall in the artwork he’s become famous for: from streetscapes that are sometimes intimate like the nuoc sam seller depicted in one of his drawings to the collosal bird’s eye drawing that takes up an entire wall of the gallery.

Fawcett sometimes will use red to accent parts of his drawings, but the print embedded in the wall has an unusual accent: actual light. He gestured to a compound on his drawing. “When you see the lights on in this building, which is the French Consulate, it means the bar’s open,” he said opening what turned out to be a false wall. When he does that, you realize print hides a false walls, a safe door to what might be described as the city’s coolest living room: a cozy space lined on one sight with seating face a sort of reverse bar that opens to the seated clientele rather than hiding the machinery of mixing.

The studio is a bar as the artist is a bartender. Fawcett frustrates categories. Like a newly discovered species, a new term must be made up for his previously unknown kind of creature. Fawcett offers a possible title, “bartist,” in one of his latest drawings: a surreal picture that imagines his wrist open like the hood of a car. Inside are cogs and bars rather than flesh.

Bartending and hospitality are flagship skills you’d see on Fawcett’s LinkedIn page. His first forays into mixing drinks were as a student in college where “obviously, I got a job at a bar,” Fawcett said matter of factly. Whereas most people might have at one point in their life bartended to do something else, Fawcett bartended to bartend and grew to have a storied career as a publican, which included serving for former James Bond actor Roger Moore.

He made drinks for Moore—who reportedly prefers a weakened bloody mary—his family and their coterie of film luminaries for six years in the mid-aughts before moving on to a series of restaurant gigs around Europe and Asia before landing in Vietnam in 2011. A couple of years after he arrived in Vietnam, the restaurant project he was called in to work dismissed Fawcett believing they could run the show without him (they closed shortly after). Fawcett said he started going on walks just to clear his mind just as he was drawing just to pass the time, a thing to do while you do something else. Fawcett said he started becoming very aware of his surroundings in a new way. 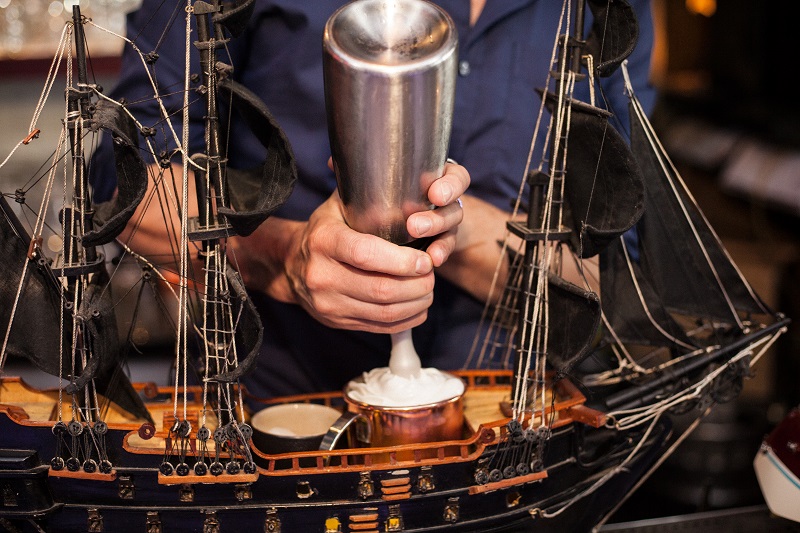 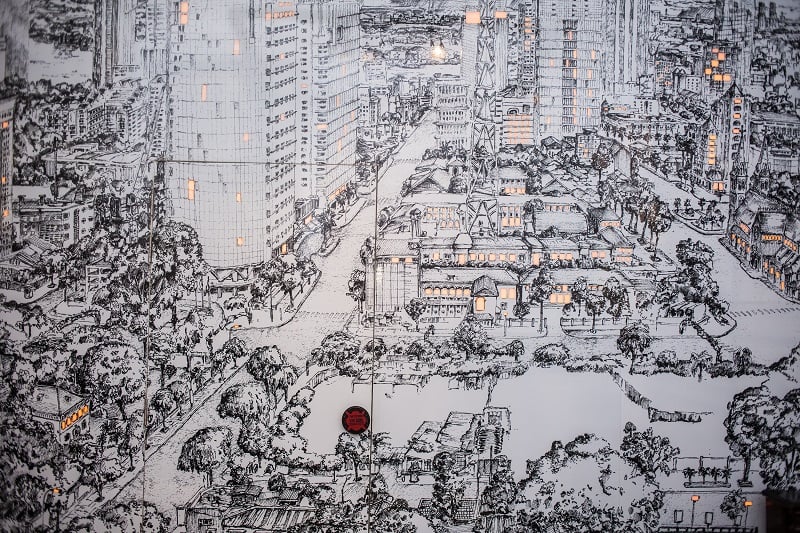 “I walk around the streets now, the guy on the corner, I know him very well. He fixes the motorbikes. The guy at the door, in his 60s but he’s been watching the door for years,” Fawcett said recalling the regular characters on Ly Tu Truong street.

“They’re all out there working hard jobs for not a lot of money,” Fawcett added.

Even today, Fawcett prefers to walk anywhere he needs to go, and that may be why everyone seems to know him in the area. They will see him walking or seated for hours on end adding line after line until he’s captured his subject to his liking in drawing. 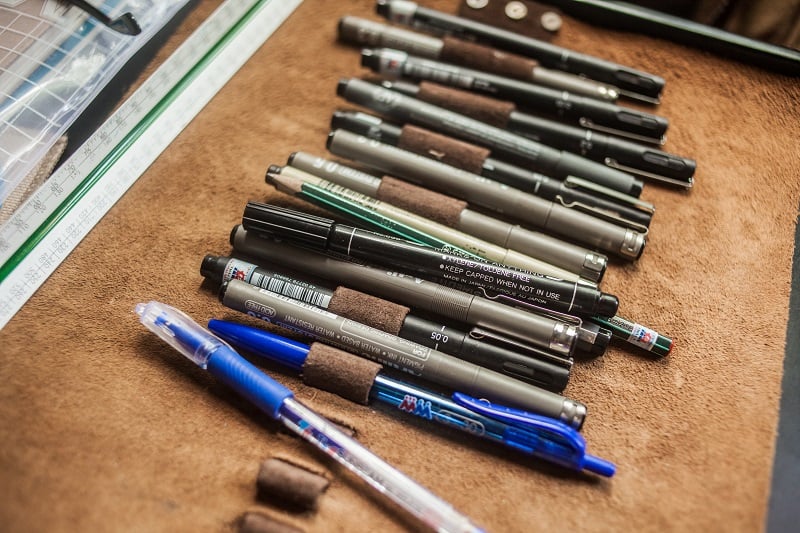 Fawcett will sit still for a city that won’t. The Saigon of last year is already a dated image. Who remembers what the park in front of Ben Thanh Market used to look like before it was walled off for construction? Fawcett does. It’s captured in a drawing owned by one of Fawcett’s buyers. Among the group of patrons that Fawcett has sold his work to is Ho Chi Minh City businessman Dave Gorman. “… he’s capturing the city in a very detailed way. He will capture the personality of the city in a way that other people don’t,” Gorman said. “He’s not just drawing buildings.”

In the 14 years Gorman has lived in Vietnam, he’s watched the city change and then change again. Gorman met Fawcett at a restaurant he was managing and grew fascinated with the artist’s talent serious contemporary anthropological study of the city, capturing the now. “You can look at his stuff and go, ‘I’ve seen that place, I remember where that was,” Gorman said.

For Gorman, the city’s culture expresses itself as a one loving diversity and entrepreneurship. “ The street life, restaurant scene, architecture … it shocks people when they come,” he said. “It’s an electric city. It’s evolving so fast. As it grows, “It’s going to lose a little of its personality.” 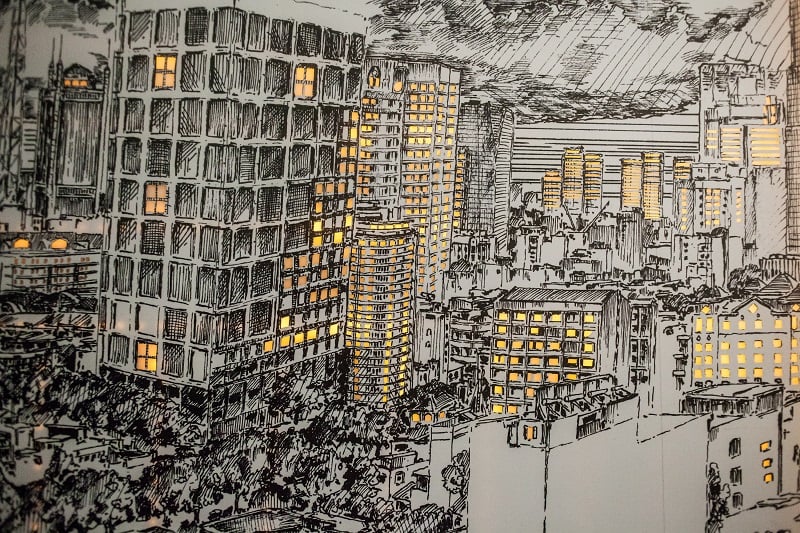 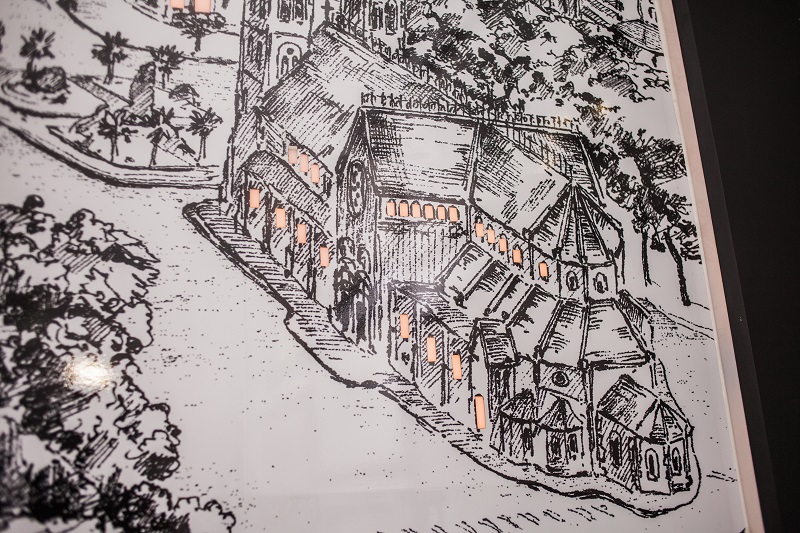 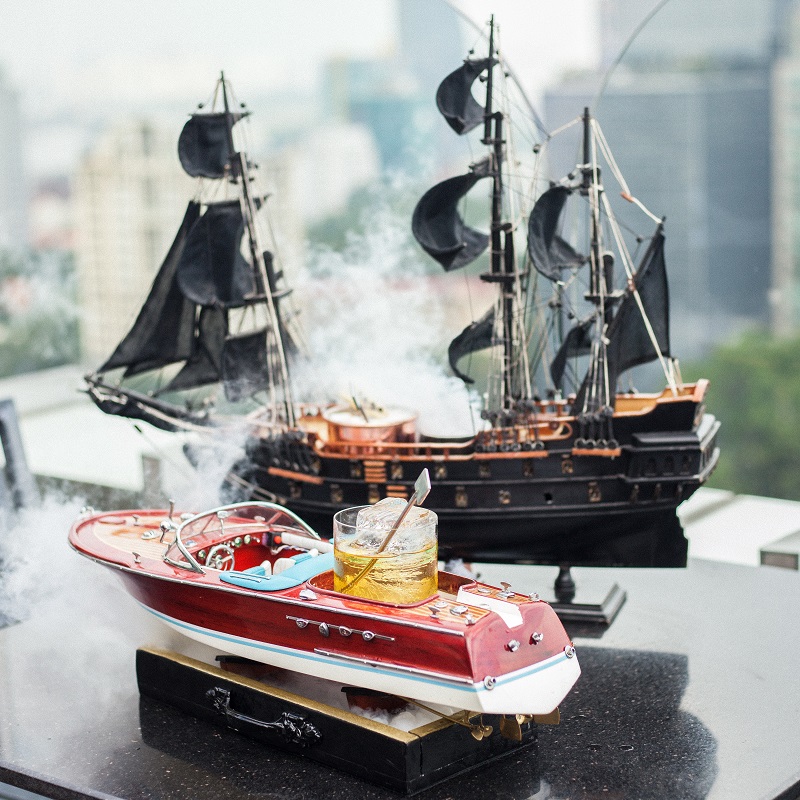 Through the years, Fawcett amassed enough drawings and knowledge about Vietnam and Saigon to publish Cocktail Art of Saigon, a collection of historical anecdotes matched with drink recipes the artist’s visual representation of certain Saigon touchstones like Ben Thanh Market and Dinh Doc Lap. For the downtown market, Fawcett offers a drink of lychee and ginger; for the presidential quarters, a drink of almond and cherry.

It’s a book that would require a team composed of a trained artist, mixologist and historial to produce. Or just one Richie Fawcett. “For me, I’m a trained archeologist. My passion … is to understand a foreign culture.”

One of Fawcett’s most important accreditations is an official commendation from the Vietnamese government’s Culture Department. Known officially as a Certificate of Authenticity, it is both a recognition of the value of the work Fawcett has done documenting Saigon in “Cocktail Art of Saigon” as well as a license to use the country’s important pronouns, its names, traditions and images. The 2016 book will soon get a follow up volume, which Fawcett expects to publish before Christmas this year. Fawcett’s work looks outward, but for him the work is deeply personal and a critical part of how he’s developed an understanding of himself. “In terms of what fires me up is to learn something new where you also learn something new about yourself. “We’re just learning about ourselves all the time.”

It’s scholarship as self exploration, and Fawcett is cool with that. “I’ve probably learned more about myself here than I have at any point in my life,” he said. “If you have an open enough mind and an open enough heart, you’re going to learn about yourself.”