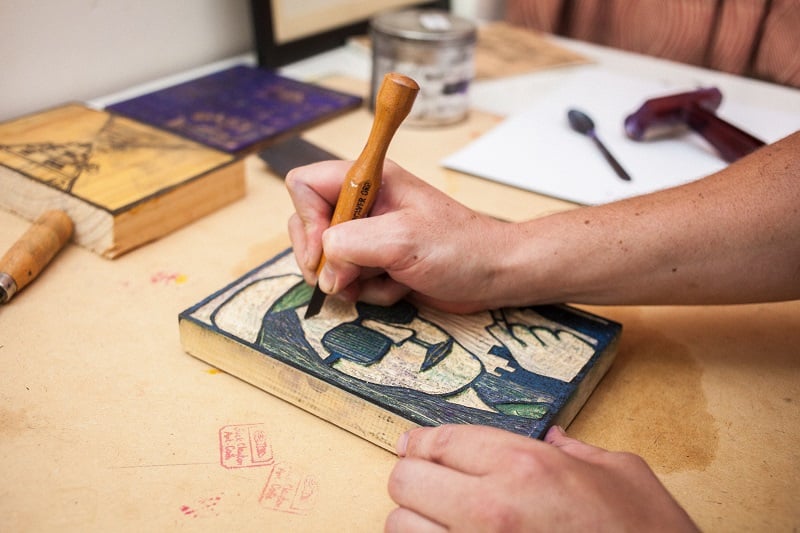 The duck peering over the broken bottom half of the egg in wood print artist Jack Clayton’s (www.jackclaytonart.com) piece on Vietnamese street food almost looks kind of cute until you see the other visual cues: tamarind, a hot pepper nibbled in the neighboring frame, the long leaf of Vietnamese coriander next to it. On important levels, Jack’s art works better if you’ve lived in Vietnam for a while and know how to read it culturally. Specifically regarding his Vietnam series, it assumes you can read some of the Vietnamese symbology.

It’s also easier to literally read if you can understand some Vietnamese: above the duck you may have developed a liking to the words in bold, big script as loud and as bold as how they’re heard in the wild from wandering snack sellers peddling the baby duck for consumption: “Hột Vịt Lộn,” the frame announces.

There’s so much about Jack Clayton’s art that you have to process before you mentally arrive at the physical shapes and colors of what’s before you. For one, there’s the cultural imagery. His interest lately is in working with Vietnamese icons, a place you have to go if you’re an artist who’s paying attention. “Wherever you are, you’re going to be inspired by the environment,” he explains. Also, there’s the medium. His pieces are wood prints on traditional, handcrafted dzo paper which give the works a timeless, found-in-nature feel.

Jack selected his medium on suggestion from a former teacher. As he neared the end of his education at Leeds Metropolitan University in England, his instructors urged him to adopt a distinguishing expressive mode. “They encouraged you to have some kind of craft or style,” he recalls. A teacher notes his pen and pencil drawings bore strong similarities to etching and suggested he take up what has become his signature thing for the last 10 years. 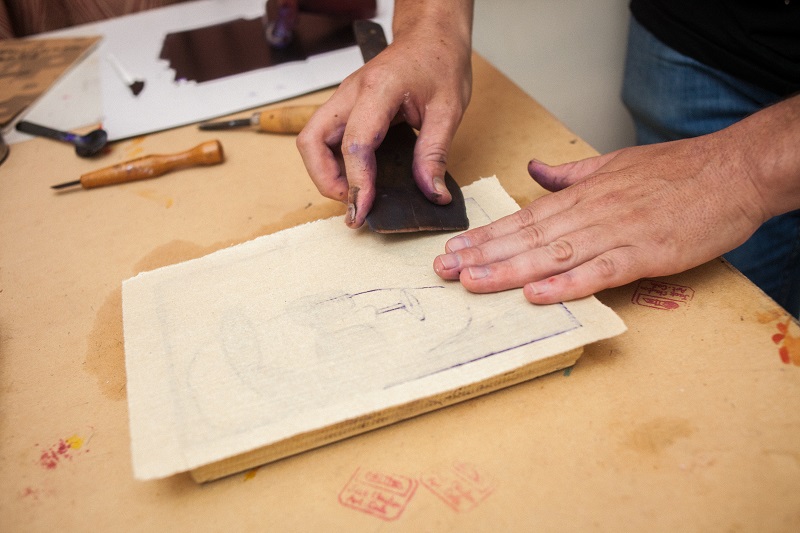 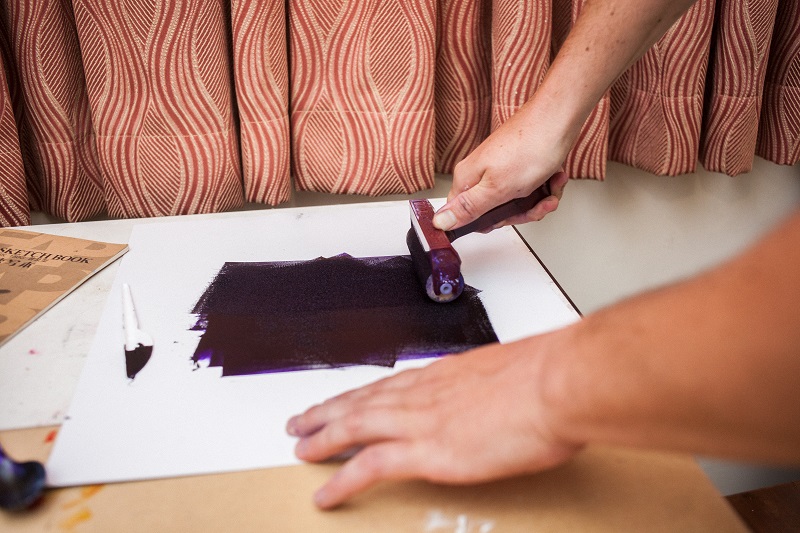 Jack’s chosen medium is a time and patience-intensive process that involves making a wood print—a flat wood carving that an artist cuts their image into—applying it to the print and pressing a canvas on to the the print. Like a hand screen printed tee shirt, the the wood print acts as a stencil: where the contours of the relief ’s raised, inked edges make contact with the canvas and the valleys do not. The combination of presence and absence marks the canvas with an image. The resulting work’s lines mirror the wood of the stencil: heavy, chunky, textured and rough.

The wood is never perfect, and the print makes creative use of the medium’s flaws. The areas of solid color are often speckled with white where the stencil didn’t quite make total contact. A lack of integrity in the lines leaves them looking like arrested movement, like they will spring off the dzo paper he favors when your back is turned.

The medium best and most clearly conveys simple figures like straight lines and shapes, but it’s almost like Jack took that as instruction to try to capture more challenging subject. One of his works depicts a food cart angled away from the viewer. The depth and dimensionality is hinted at but the stubborn flatness of the medium tends to prevail. The tension leaves a unique visual result that’s somewhere between cartoon, hieroglyphics and graffiti.

On one wall of his studio hangs a large circular drawing made of intricately made drawings within the larger piece that beg closer inspection. A patchwork of scenes within it show pieces of Vietnam’s visual identity: the Saigon paving stones that you’d find nowhere else, the crazily wrapped power lines wrapped around one another, Ben Thanh Market, etc. 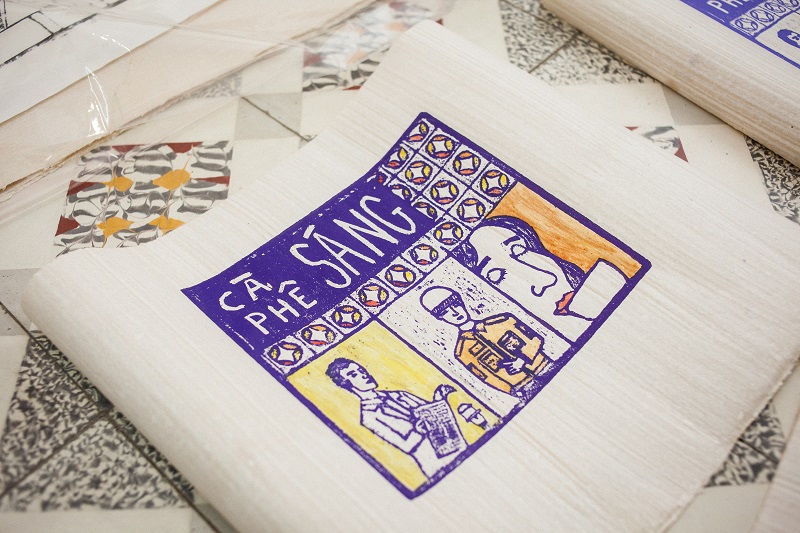 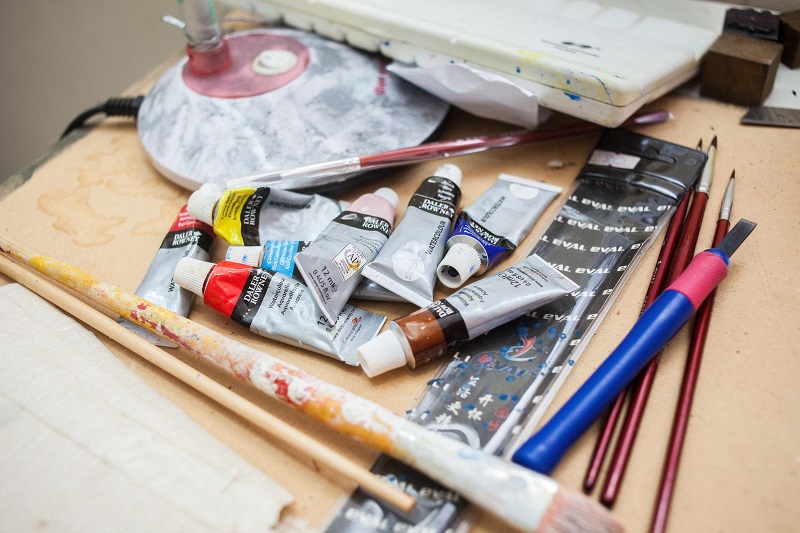 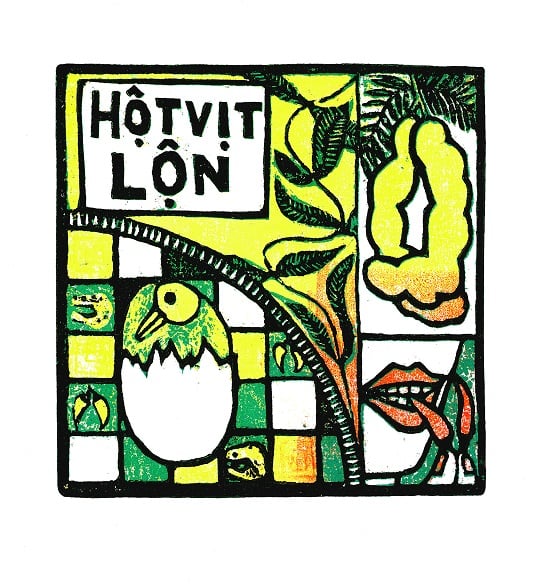 Seeing Jack’s work is like taking in a sample of the human record. It’s a marriage of anthropology and art, an interest he said caught up with him as he was traveling. “I know leaving the UK and traveling would improve my art and experience a wider range of experiences,” he says. Doing location specific art, “it just naturally came.”

Jack left his native London and hit the road in 2010 at the not untender age of 25. He spent three years in Australia before traveling through Southeast Asia and settling in Vietnam. From the beginning he worked to understand his surroundings through his art. His first piece here was a massive abstract print with the anatomically imaginative visual argument that two faces might share a single pair of lips if the two were joined at the bottom like a V-shape. Curiously, the medium’s lack of facility with depth makes the visual argument friendlier visually like when you see Picasso move the parts of a face around to the wrong places and it’s still alright. 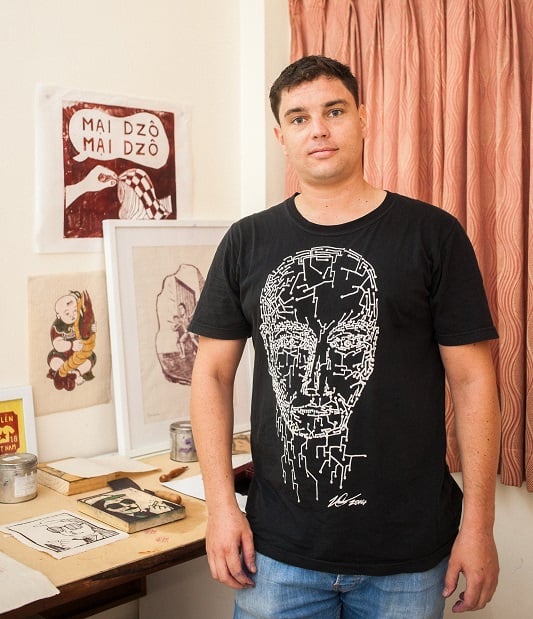 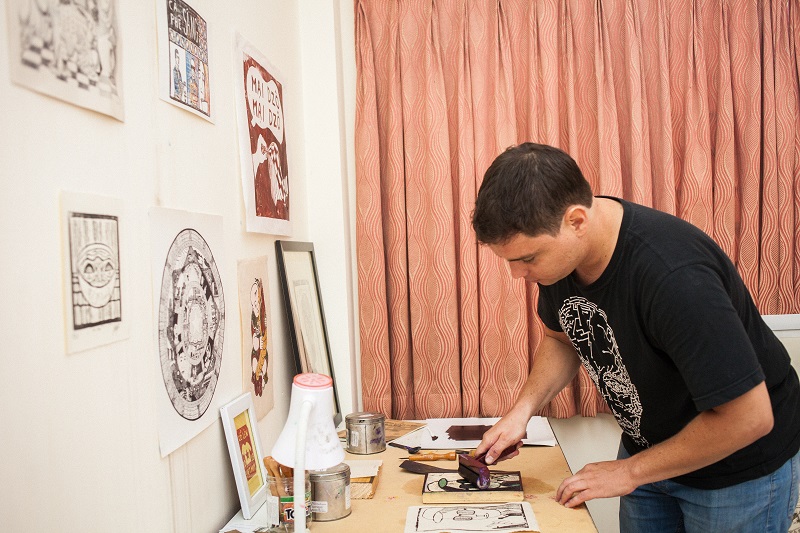 Jack said Vietnam was the best suited for the kind of artist career he wanted to have mostly because it enabled him to have one. His salad days of service industry work in Australia were ill suited to enabling him the time and space to grow as an artist. In Vietnam, he’s grown a following as both an artist and an art teacher. This summer, Jack delivered a series of art classes at Australian International School prior to leaving for a month-long holiday before returning to London for a visit with his girlfriend.

While back home, he will be showing his works of to would-be collectors, those who want a little bit of Vietnam from abroad.

But it’s a translated Vietnam, a version of Vietnam seen by someone who reveres the place and knows enough to know he knows enough but could know more. 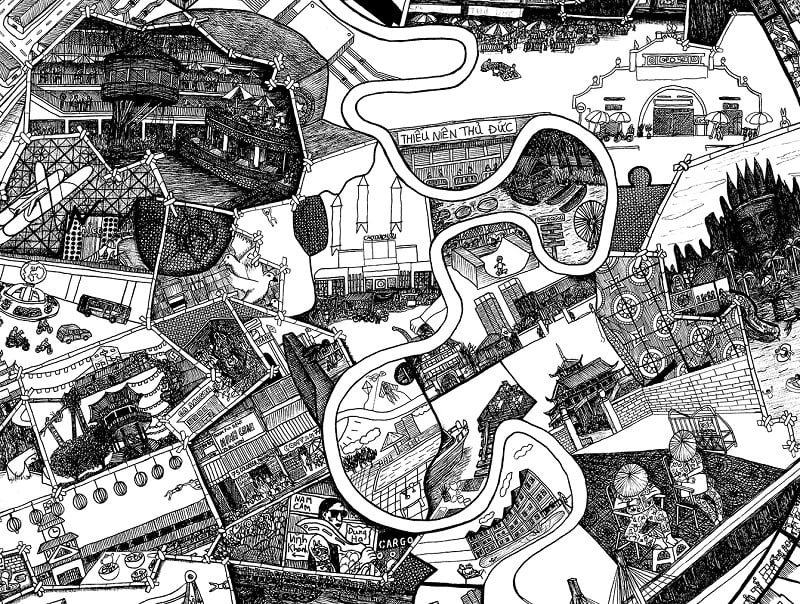 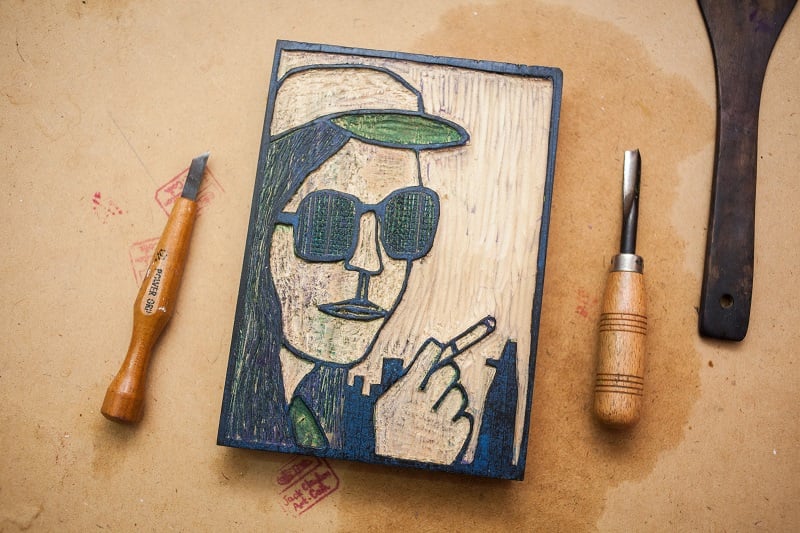 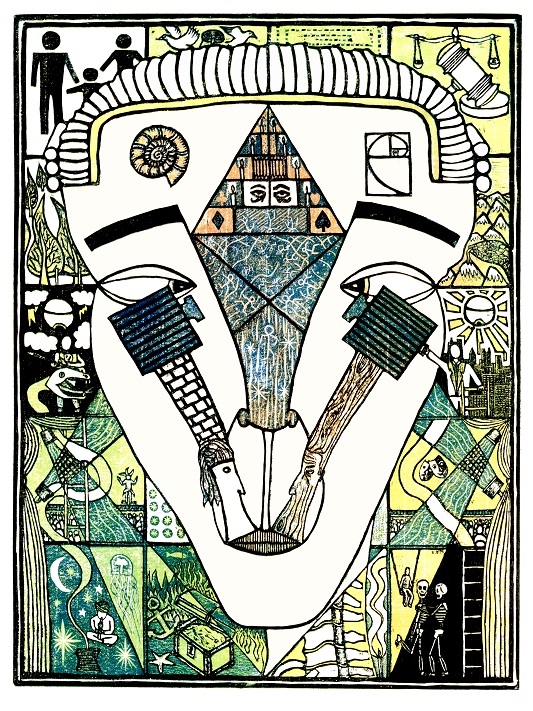 It’s a trial by error process. In one of his pieces, he draws Ho Chi Minh himself, an icon that doesn’t poll well in some circles in these parts. “These days I wouldn’t draw Ho Chi Minh. And I still feel a bit weird about his being in there,” he said. Through conversations with his Vietnamese friends, Clayton said he’s done the work necessary to get an understanding of his environment but eschews concerns that he’s not seeing Vietnam the way the Vietnamese see it. “It’s my own personal work rather than trying to say what it is,” he said.

Clayton is candid about his knowledge of the area. “When I first moved to Ho Chi Minh (City) I didn’t know know nothing,” he said. A beat. “I don’t know much now,” he added. “But you’ve got to research the area to make artwork around it.”